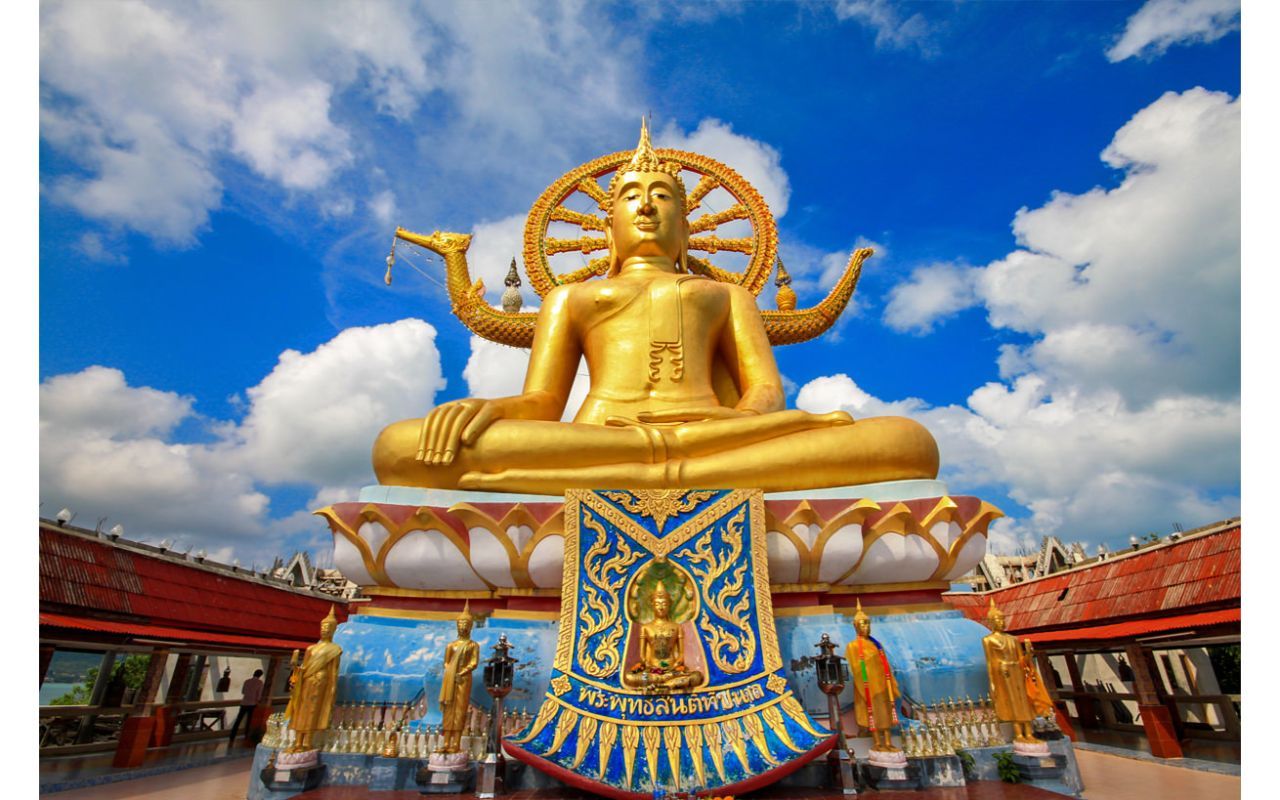 You Chill We Work advises you to visit the incredible temples in Koh Samui to make unforgettable memories !

The island of Koh Samui is, above all, famous for its beautiful white sand beaches, as well as for its coconut production The island is the largest producer in Thailand. However, as you walk inland, you will discover the Buddhist culture. With its many colourful temples, its ancestral statues with beautiful shapes, without forgetting the unbelievable preserved mummified monks, the island will seduce you. There are so  many wonders to discover !

There are many reasons why travelers explore Buddhist places in Koh Samui: curiosity, spiritual research, aesthetics taste, interest in history. These buildings are incredible wonders of the rich Thai architectural past, which will captivate you with their sumptuous ornamentation, their remarkable shapes.

Today we tell you about the 11 temples that you must not miss visiting  during your stay in Koh Samui :

It is by far the most visited monument of Koh Samui. It’s an open temple, 12 meters high, the golden statue of the Buddha is visible from far thanks to its impressive size. You can see it from everywhere and even from the plane ! Standing high, you can enjoy a magnificent view of the island. Sparkling in the night, the Buddha will give you the impression to watch over you with dignity. 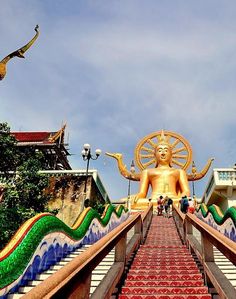 Located in the northeast of Koh Samui, Wat plai Laem is a Buddhist temple, which is located near the Wat Phra Yai. It is a modern building, nestled on the edge of a lake, and offers a beautiful view from the water.  You will be able to see the faithful feeding the fish in exchange of a donation. One of the main attractions of this site is the huge white statue depicting “Guanyin”, the goddess of Compassion and Mercy, with her 18 arms.

The building incorporates elements of Chinese and Thai traditions. This place is a place of meditation often used  by the inhabitants of the island. 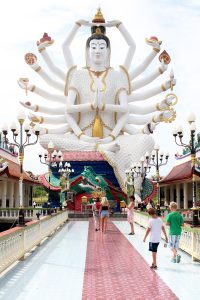 This ancient temple is consideredas  the Guardian of the ancient “White Marble Buddha”, which many believe, ,especially  the resident monks, is several hundred years old. It also houses the “Secret Hall of Buddhas”, a small “chapel” containing countless small statues, the largest of which is 3 metres long. 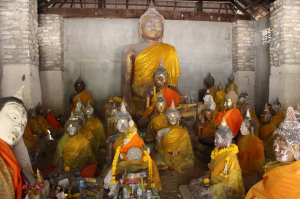 It is a beautiful white temple that shelters several  remarkable works of art and has a unique architecture. The roof of the temple is made of red, green and yellow tiles, a small statue of Buddha sits at the entrance of the monument. The Wat is also famous for its mummified monk, the very famous Loung Por Ruam,
visitors can admire  inside a glass cage, sitting in the same position for 25 years. 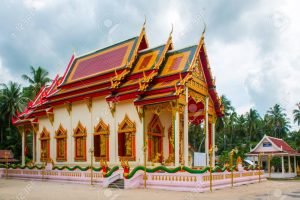 This temple is famous for sheltering a mummified monk named Luong Pordaeng, adorned with sunglasses. Through a window, you will see this monk very revered in Koh Samui. Sitting in the lotus position (meditation position), he has been mummified there for over 20 years.  According to the legend he died in 1977 when he reached Nirvana. 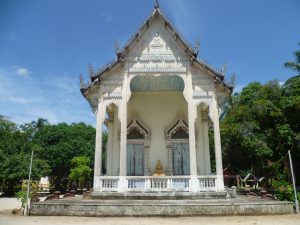 It is certainly, the only place on the island where you can admire Koh Samui as a whole. Near the temple, a large standing statue of  Buddha overlooks the treed and flowered area, surrounded by sculptures of  all Chinese zodiacal signs.

The originality of this temple lies in its material : red terracotta walls and roofs. The sculptures are finely carved and beautiful. In front of this building, the golden pagoda remains a place of popular rites. According to  the legend, the temple preserves a relic of the Buddha. 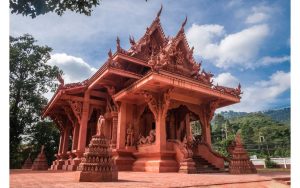 4 meters higher than the “Big Buddha”, the work depicts Guan Yu, a Chinese War Lord who lived  in the 2nd century, at  the end of the Han Dynasty. He played a fundamental role in the civil war that led to the end of the Han dynasty and the establishment of the Three Kingdoms period, of which Liu Bei was the first emperor. 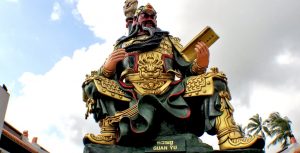 The Couché Buddha, a 10 meter tall monument. The place offers a magnificent view of the “5 Islands”. Built near a Buddhist temple, this sacred place is highly respected by the inhabitants of Koh Samui, but little frequented by visitors. Here you will feel a real sense of serenity ! 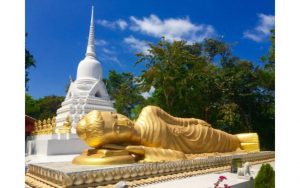 One of the particularities of this place is that you can enter inside the statue and walk on the ship’s deck through a staircase that leads to the upper floor. At the heart of the statue there are articles and amulets dedicated to the monk who inspired this impressive work, a well-known and highly respected religious personality in Thailand. 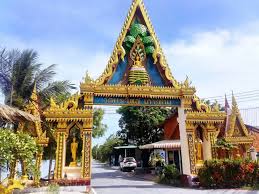 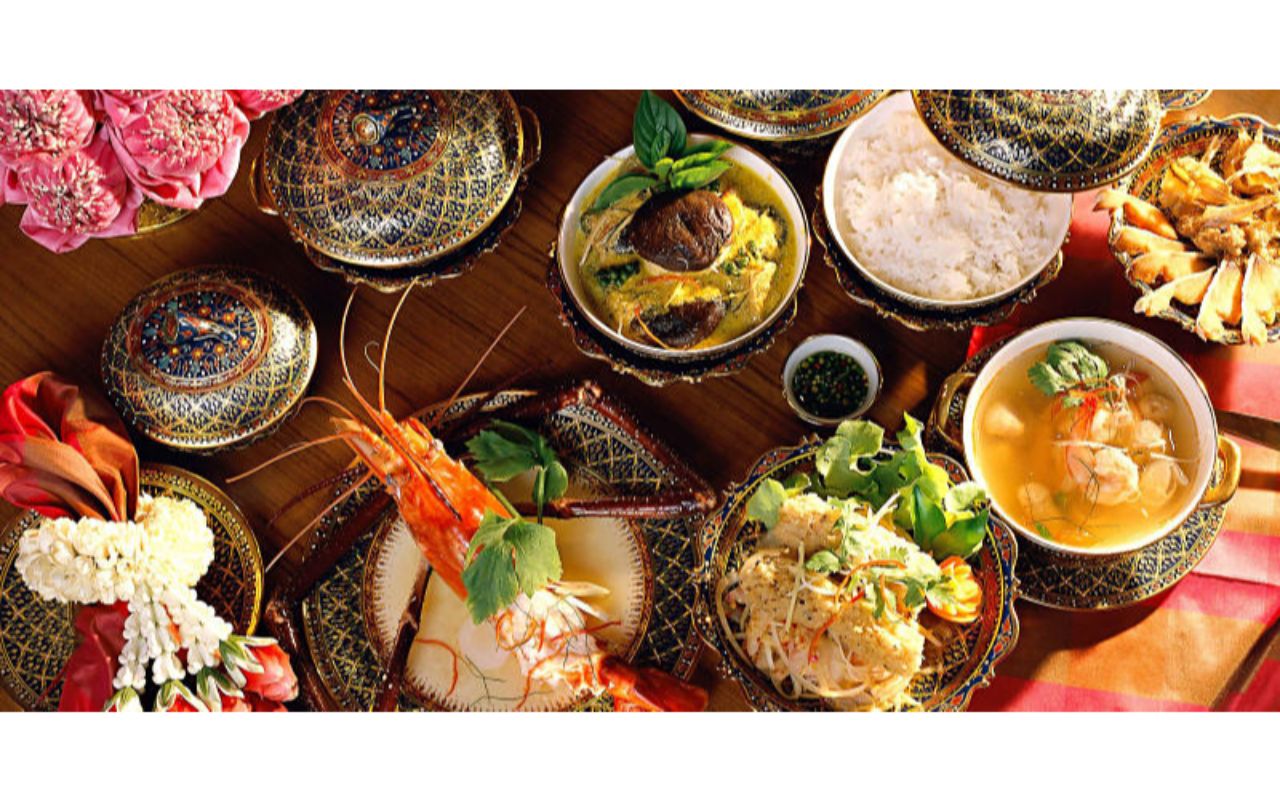 The 10 Thai dishes you shouldn’t miss 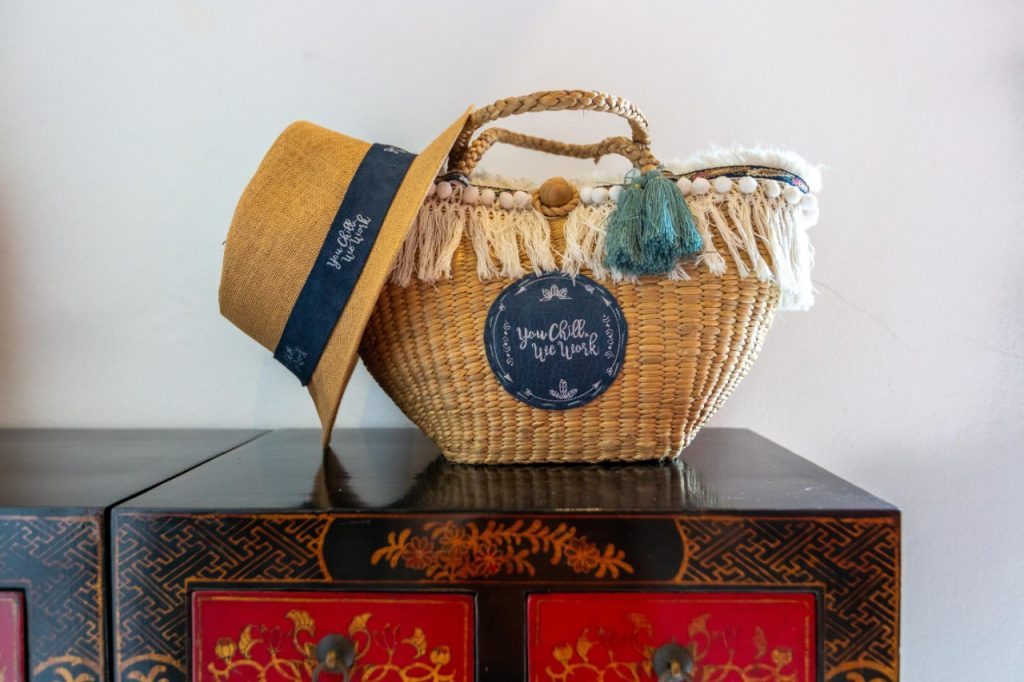 The Little Story Behind You Chill We Work